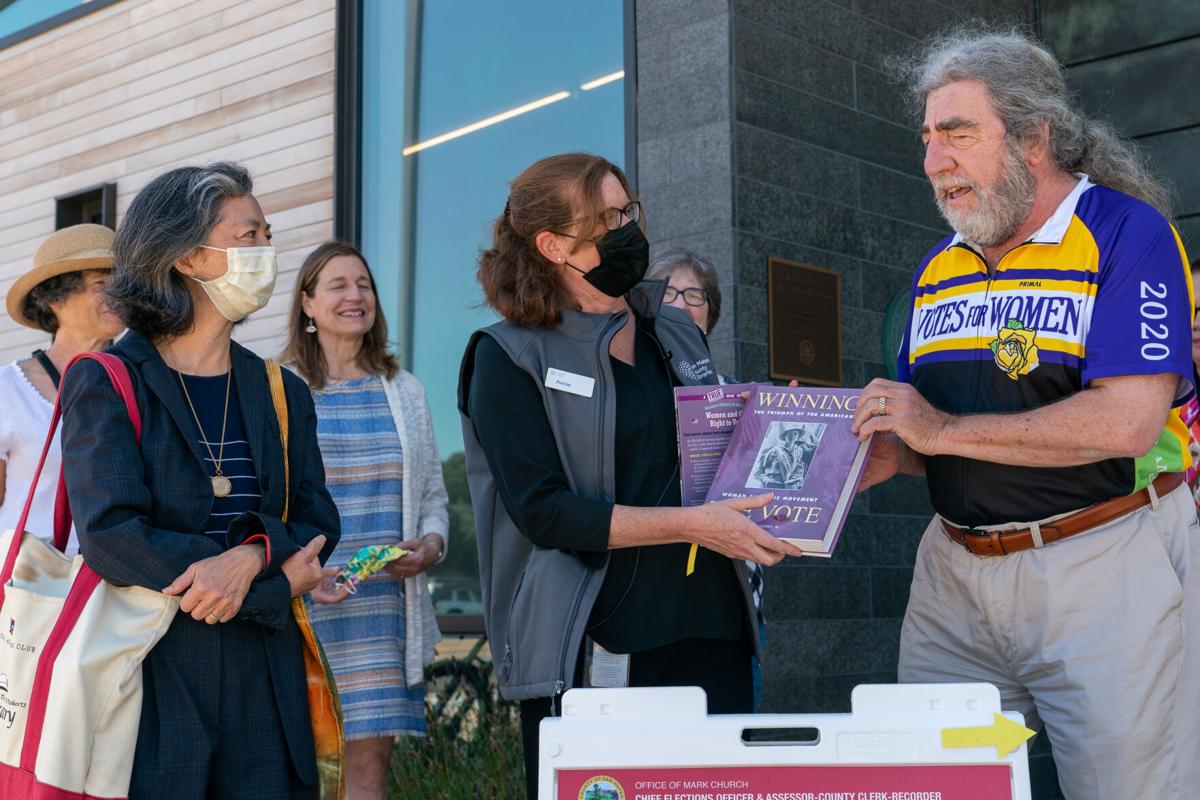 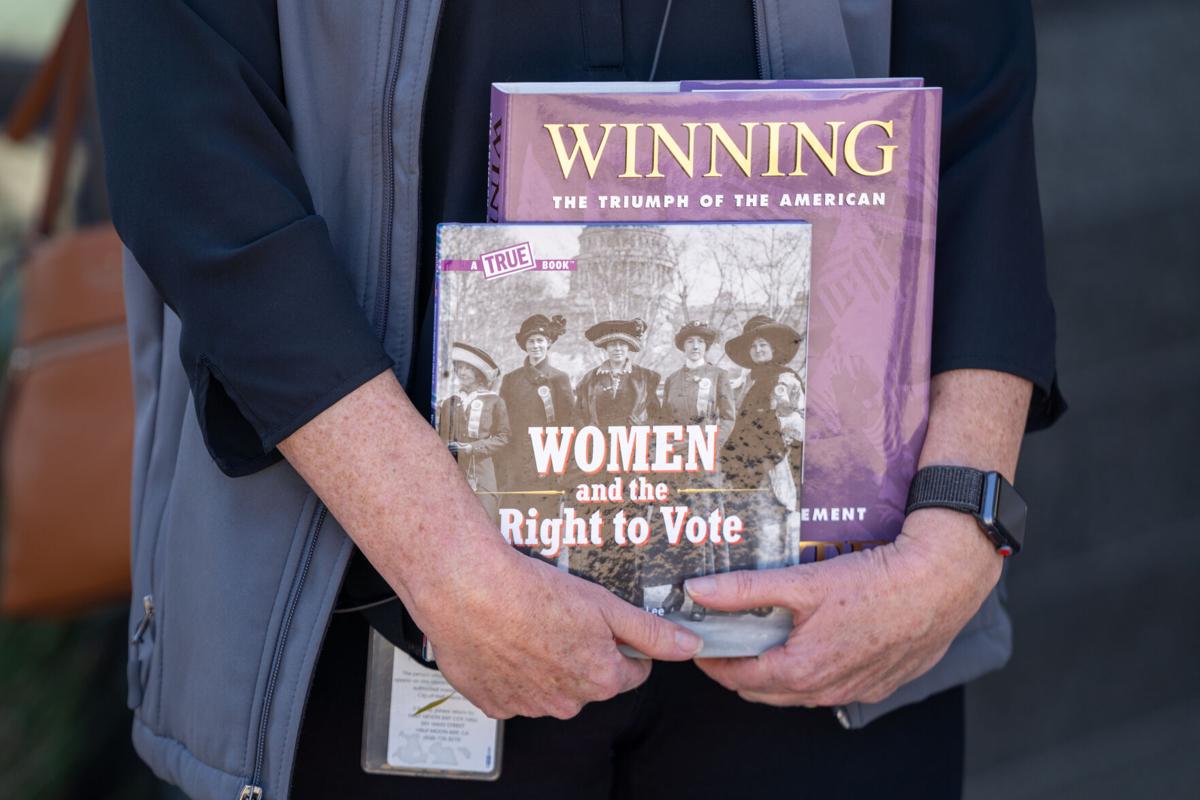 Library Manager Annie Malley holds two books from the local chapter of the American Association of University Women to add to the Half Moon Bay Library in Half Moon Bay. Adam Pardee / Review

Library Manager Annie Malley holds two books from the local chapter of the American Association of University Women to add to the Half Moon Bay Library in Half Moon Bay. Adam Pardee / Review

The American Association of University Women was founded in 1881 out of frustration among college-educated women who, despite their degrees, struggled to find work in their fields. Within a few years AAUW had members across the United States and they have been working tirelessly ever since to remove the barriers that impede gender equity.

From publishing reports in 1885 dispelling the myth that university life impairs a woman’s fertility, to supporting the research of academics such as Marie Curie and Judith Resnik, to advocating for the Paycheck Fairness Act of 2019, the association of women across the country has fought against gender discrimination.

Here in Half Moon Bay, the local branch has been working for the cause since 1967.

“It is an organization that started out of a need. And now the organization continues our mission and we will stay focused on it for as long as it takes to advance gender equity for women and girls, through, specifically, research, education and advocacy,” said Peggy Rozhon, current president of the Half Moon Bay branch of AAUW.

Every year local members raise money so they can give scholarships to young women who graduated from Coastside high schools. Last year they awarded four $2,000 scholarships to local students. They also work in tandem with the library to help people get signed up to vote.

This summer the association ends a year of celebrating the 100th anniversary of the passing of the 19th Amendment — ratified and adopted in August 1920 — granting women the right to vote, albeit mostly white women at that time.

“I think it’s important for people to not forget this important American history and how this didn’t just fall out of the sky,” Rozhon said. “They worked really hard to make this happen. Women really need to remember that all of this is 50-50, we are not lesser citizens, and it took 72 years of persistence and speeches, knocking on doors, traveling from town to town.”

To commemorate the occasion, the association arranged to have two books about the history of women’s suffrage, written by local authors, placed in the Half Moon Bay Library for the community to read.

“We love being able to highlight the work of our local authors,” said Anne Marie Malley, branch manager of the Half Moon Bay Library.

“Winning the Vote: The Triumph of the American Woman Suffrage Movement,” by Robert P. J. Cooney Jr., is considered one of the most comprehensive resources on the history of the suffrage movement. Cooney is a longtime Coastside resident.

“When I started, the whole movement was unknown and the general narrative was that Congress gave women the vote. That’s the way it was framed,” Cooney said. “It robbed women of any power or any ability and didn’t show their movement, which is a really important part of our history.”

When Cooney started writing this book in 1993, there wasn’t much about the suffrage movement in history books. He read everything he could find.

“The times were very different and it was hard to get information, but it was clear to me that there was a movement here. And the more I looked into it, there certainly was,” Cooney said. “To me, it’s one of the great nonviolent civil rights movements in American history.

“It’s really mind blowing to think about the scale of that change and also that it was permanent and it occurred without any violence,” he said. “It was a nonviolent civil rights movement. The whole idea of the people rising up and demanding equality and justice, that’s what really appeals to me.”

Cooney traveled to libraries and corresponded with state historical societies throughout the country in order to track down stories and information about the suffragettes.

He recalls visiting the Huntington Library in Los Angeles where, when asked about the movement, they brought out a big cardboard box covered in dust so thick you could write your name in it. No one else had come and asked for the records they had in their library about the suffrage movement in a long time.

“These sorts of things reinforced the fact that this hadn’t been looked at well and motivated me to go ahead and do it myself,” said Cooney. “I felt this was incredible, these women are unbelievable and they deserve the right kind of tribute, and they’ve never gotten it.”

Local author Cynthia Chin-Lee also authored a book that will be available at the local library. She is also a member of the Review’s Editorial Advisory Committee.

“I was really inspired by a talk that Bob Cooney gave to the Oracle Women’s leadership, where I used to work in Santa Clara, for Oracle Corp.,” Chin-Lee said. “I thought the story of how women worked together for over 70 years to get the right to vote in a peaceful, nonviolent way, was just incredible. The patience they had to do it over the many decades, and the setbacks they had.”

After the presentation Chin-Lee told Cooney that as a children’s book writer, she was interested in writing for kids about the movement because she thought it was a story people needed to know. In 2020, her “Women and the Right to Vote” was published.

Chin-Lee is passionate about diversity and inclusion and has written seven other books for kids on these topics.

“It very often is, as Margaret Mead said, a small group of people that are dedicated to a cause and then it ripples out from there,” Chin-Lee said. “There is another important election coming up in September. We all have to get out there and vote and to know how people struggled to get that precious right. It’s something we need to understand to get involved.”

Alex Padilla has only been in the U.S. Senate for four months, but California’s first Latino…

Kirsten Hagen, a Realtor with offices in Burlingame and Half Moon Bay, was honored with the …

Water agencies are eyeing another dry year across the state, and local water districts are t…

As part of a multiyear, statewide energy policy in California, Pacific Gas and Electric Comp…

When James Brumder and his wife, Louise Gonzalez, moved into their home tucked up against th…

Local author invites all to help save planet

“The Sea is Rising and So Are We: A Climate Justice Handbook” invites all to learn how to bu…