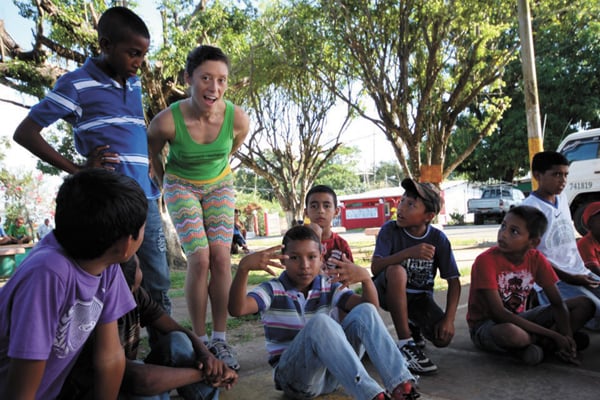 Anna Pasternak helps kids from Fundación la Providencia get ready to perform choreography they learned that day for an audience of their peers in a Movement Exchange program. 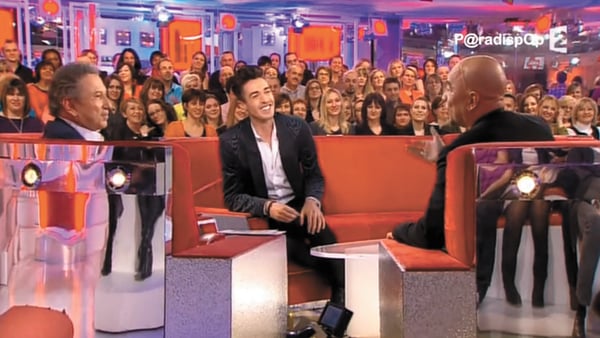 Anna Pasternak helps kids from Fundación la Providencia get ready to perform choreography they learned that day for an audience of their peers in a Movement Exchange program.

Before devoting their lives to dance, Zack Benitez grew up in Half Moon Bay and Anna Pasternak grew up on Martin’s Beach. They were linked by early exposure to dance with the Shely Pack Dancers in Half Moon Bay.

Now the young adults are making their way in the world in points far from their early dance school, Benitez in Paris and Pasternak in Panama.

Both recently returned to their hometown to share their latest exploits.

An American takes Paris by storm

Zack Benitez knew what it was to dance with the stars. In Los Angeles he served as associate choreographer in “Live to Dance” with Paula Abdul, and Parisians became acquainted with him as a lead dancer and dance captain in the rock musical “Adam et Eve” (“Adam and Eve”) in January 2012 in the Palais des Sports in Paris.

Having the largest budget for such a production in French history, “Adam et Eve” was primed for a tour of France, Belgium and Switzerland. Then economic strain coupled with a presidential election cancelled the tour two days before Benitez was to due to return to Paris.

Deeply in love with the city by then, he “was looking for any reason to get back to France.” He did not know that a reason was already in the works: In May 2012, he had met with producers of the popular French variety show “Vivement Dimanche” (“Live on Sunday”) and they’d chatted about working together again. That was fine with Benitez: “I saw a lot of room for artistic freedom,” he said Sunday by phone from Los Angeles. “There was a huge platform to create … I realized this was the production I wanted to work with.”

Opportunity knocked at Christmastime 2012 when Benitez was invited to choreograph an episode featuring Pascal Obispo, the artist who wrote “Adam et Eve.” “I jumped at the thought,” said Benitez, who rushed back to Paris to audition 150 hopefuls “excited to see a choreographer from America that they already knew.”

He put together a sparkling contemporary ballet number to “Savoir Aimer” (“To Know how to Love,”) a song Obispo wrote for well-known French singer Florent Pagny. In it, five couples represent different challenges to love. The three-hour variety show, hosted by Michel Drucker whom Benitez dubbed “the Dick Clark of France,” aired Feb. 17 on France2.

Benitez, the first American and the youngest person at 23 to choreograph for the show, was interviewed on the show with Obispo and Drucker. He appeared with poise and spoke near-flawless French — despite the fact that just before he went on, Obispo’s 12-year-old son had reminded him that millions would be watching. “That’s when I was like, I’m nervous,” Benitez laughed.

But the jitters passed. “It was a very, very big honor,” he said. “Not only the producers, but the artists, Pascal, the director, the crew, technicians, costumers were very, very pleased, and I was pleased that they responded so positively and so enthusiastically about the work they presented.”

He plans to divide his time between Paris and “Vivement Dimanche,” and Los Angeles. His goal is change in France’s dance industry.

Americans and French look ahead differently, he said. In America, “we are raised (to believe) that we can be what we want. The sky’s the limit,” but in traditionalist France, “If that’s the way it is, that’s the way it stays.

He plans to return to “Vivement Dimanche” in April to explore options.

At 27, Anna Pasternak is the founder and director of Movement Exchange, a program that runs eight-day dance exchange programs that involve volunteers with at-risk youth and focuses on service, sustainability and social change.

In other words, said Pasternak, that means when an at-risk kid dances in the programs’ final performances, the kid is thinking, “If I can get up on stage in a situation that I wasn’t comfortable with, then who knows where my limits are?”

It started in Panama, where Pasternak volunteered in 2010 to do environmental work with indigenous communities and saw something missing.

“I realized the need for this kind of opportunity for people to access their passions and skills,” she said.

Her response was to found Movement Exchange, which blended her passions for dance, public service and international exchange, based on her belief in the power of arts and dance to unite communities and catalyze change and empowerment.

That ties in, she said, with self-expression, body image, confidence-building and cross-cultural understanding. “We’re reaching global citizenship, international understanding and awareness, and they all become agents of change,” she said.

The program involves volunteers of all levels of ability from professional dancers to yoga practitioners and more. Some come through American and Panamanian university dance departments.

They work with boys and girls from roughly age 4 to mid-teens, at risk due to factors like HIV or broken homes. They lead the children in a variety of styles, including ballet and hip-hop or moves led by a dance therapist. There’s also jazz, Chinese ribbon or belly dance, modern dance and capoeira.

The children include the girls at the Malambo Orphanage in Arraijan, boys at Hogar de la Infancia in Casco Viejo and youth at Fundación San Felipe.

Once a year, there is a performance at the National Theater of Panama, the oldest theater in Panama City.

It all makes up for shortfalls in funding for art programs in Panama, Pasternak said. Sustainability is key: after the volunteers’ visits, Movement Exchange brings in local dancers.

“We aren’t just showing up one time and leaving,” Pasternak said. “We start dance programs at local orphanages so they have their own role models.”

Pasternak attended Hatch, Cunha, Half Moon Bay High schools and San Francisco’s School of the Arts before heading to Harvard to study anthropology and Latin American dance. She has mastered many dance styles including what on the program’s website she calls an “outrageous” foray in a “samba company alongside Kenya human pyramid makers and a Japanese mariachi band.” In 2011 she was a Fulbright scholar working in Mexico City.

Now she just shares the power of dance. “It’s what I breathe, what I live for. My life’s mission,” she said. “Dance has this amazing ability to motivate people.”