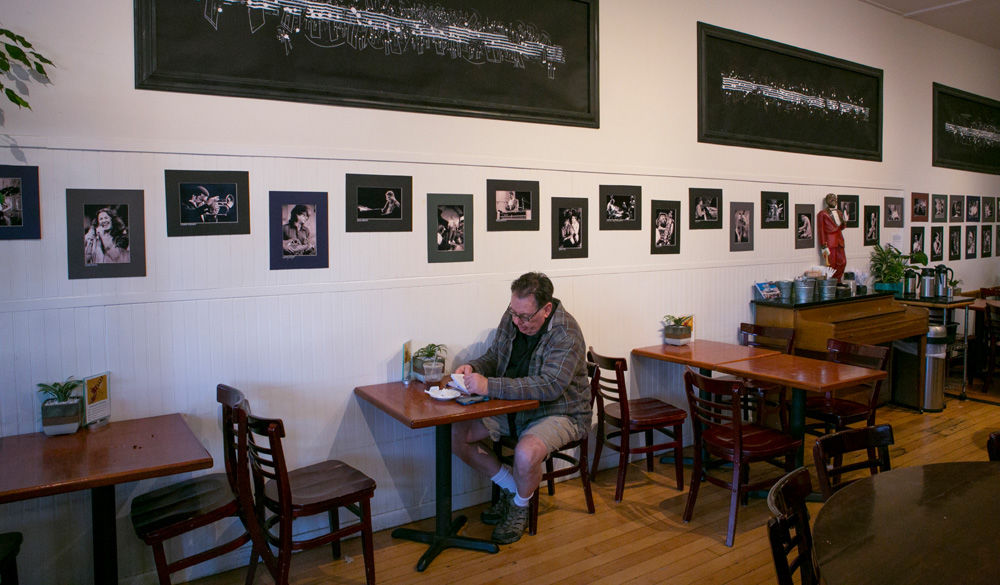 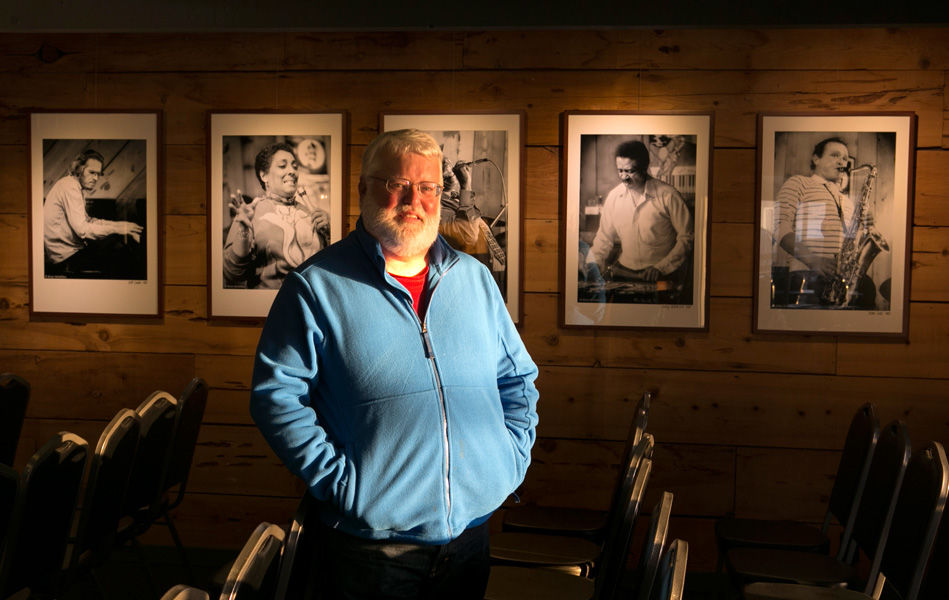 Photographer Brian McMillen with some of his photographs at Bach Society. John Green / Review

Photographer Brian McMillen with some of his photographs at Bach Society. John Green / Review

Brian McMillen spent the 1980s as a fresh-faced photographer hustling the local jazz scene in search of the perfect shot.

Many of the fruits of his labors, photos classically composed in black and white, are currently on display at Café Society located in Half Moon Bay.

McMillen, who lives in Moss Beach, started snapping photos around 1977, after a friend handed down an East German 35 mm camera.

“My interest in both photography and jazz both happened concurrently and so I started taking a camera to concerts,” McMillen said. “I shot black-and-white film 99 percent of the time and just did my own processing.

As McMillen’s prowess behind the lens grew, he switched over to Nikon and began snapping photos of jazz musicians in clubs along the coast and beyond.

“In those days there were a lot of jazz joints, clubs, venues. I didn’t buy tickets generally and sit in some seat,” remembered McMillen. “I had to get up there and try to get back stage and do whatever I could do to get close to the artists.

“Sometimes I would work for a publication and get credentials that way. You can have all access and get back stage that way,” he continued. “There would be portholes in the backdrop of the stage where you could take pictures. It was like you were standing next to them. When they were doing their sound checks, I was standing next to them.”

One of these venues was the Bach Dancing and Dynamite Society.

According to McMillen, the ocean-front jazz club on the Coastside was a favored stop for artists traveling to the Bay Area.

“It helped artists from New York to come out and fill in their time here with jobs,” said McMillen. “They would play a week at Keystone, they’d play at the Bach and then they’d go on to Santa Cruz and do whatever else they could get to fill in. So it worked out nicely for everyone.”

McMillen established a rapport with Prentice (Pete) Douglas who was the founder of Bach Dancing and Dynamite Society.

“I had been through a few concerts and had (taken) some shots,” said McMillen. “I showed them to Pete. He said, ‘Well you know, we need a photographer to document what’s going on here.’ So, I started going to every show. I brought him pictures of every week.”

When Douglas’ daughter, nicknamed Sweet Pea, went off to the Army, McMillen began living at the jazz joint. In exchange for free rent, he continued to take photos and also did odd jobs, like washing windows and setting up.

“I had ringside seats and access to the artists and everything,” recalled McMillen. “I was a beach bum and jazz fiend.”

McMillen said his most memorable snapshots are those of legendary pianist Bill Evans. McMillen was able to spend time with Evans at Keystone Corner in North Beach two weeks before Evans’ death.

“Bill Evans was a towering figure on a piano,” said McMillen. “He just drew me in. The music (said) I’m not alone. He’s a legend in the music.”

The up-close-and-personal perspective is quite evident in the vivid and sometimes gritty black-and-white photos mounted to the Café Society walls.

McMillen seems to have captured the soul of the singers who infused their music with passion as well as their very essence.

“I was in hog heaven then because I learned a lot about styles from seeing them five nights in a row,” said McMillen. “I got to know them. I’d take the artists to radio interviews and photo opps. I spent quality time with them.

“Just being with them, hanging out all week, back stage, you just become familiar with them on a personal basis,” he continued. “These people are world travelers, universal thinkers. They’ve seen people from every walk of life. They are down-on-the-ground people, not just somebody up on stage.”

To learn more about Brian McMillen, visit brianmcmillenphotography.com. McMillen’s work is currently on display at Café Society located in Half Moon Bay.

From corks to canvas

Sometimes the setting can make all the difference for an artist. For Sandy Obester, it was t…

In the multipurpose room at Hatch Elementary School, coins jingled in pockets or jars as par…

Coastside Chorale is back with holiday concert

The Coastside Chorale’s Winter Concert will begin at 7:30 p.m. on Saturday at the Coastside …